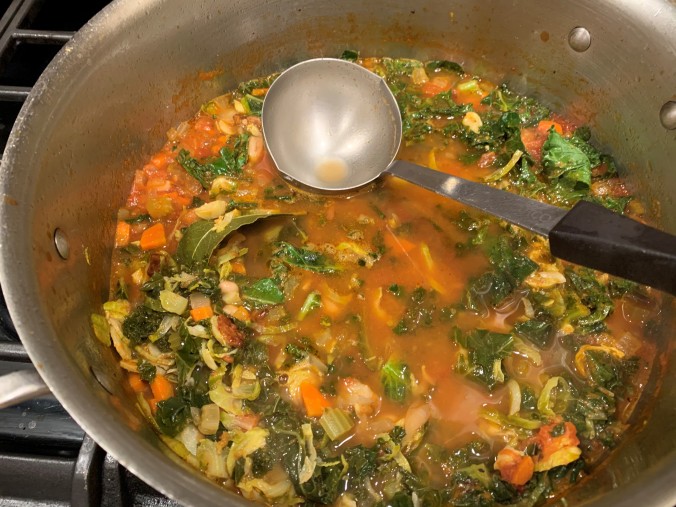 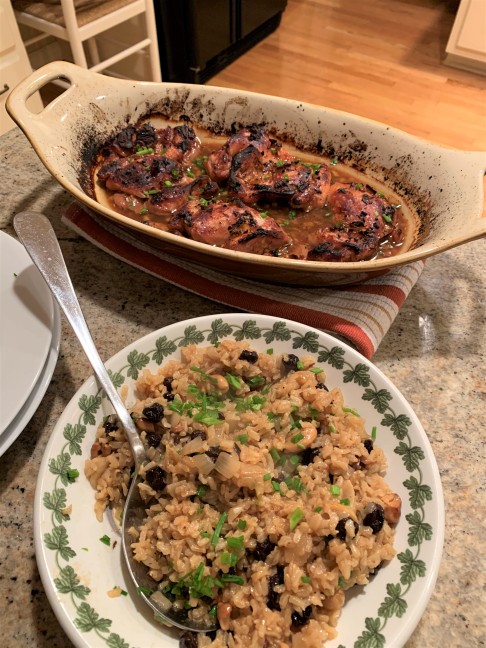 On Friday, tired from a serious workout and walking the dog and getting through the week, I could not face the prospect of grocery shopping.  But we had about a pound of haricots vert in the refrigerator, a jar of tuna packed in olive oil, and a can of black olives.  Salade Niçoise suggested itself – a nice, light, pre-Vatican II Friday dinner.*

*Vatican II lifted the obligation for Catholics in North America to abstain from meat on Fridays.  In my youth, this abstention was a serious thing – it meant no hot-dogs at Pirates games on one of the two nights we could get to Forbes Field with Dad.**  It meant being served an over-cooked piece of fish at the College Club Christma dinner dance while my non-Catholic friends got to dig into fillets.  On the other hand, it meant Mom’s delicious flounder or tuna-noodle casserole (which I crave but which Beez will not allow to darken the door of her oven).

**(Yes, my footnotes have footnotes.  Want to make something of it?)  We often went to the ballgame on our own, paying 25 cents for the street car ride from our home in Regent Square to get to the ballpark in Oakland, and then another 50 cents to get into the bleachers after the 6th inning, though they often let us in sooner.  We did this when I was 12 and my brother John 11.  If, in 2019, any parents allowed two boys of that age to get on a streetcar unchaperoned, much less attend a ball game in the city, they would be spending time in a cell next to Bernie Madoff.

But back to that salad.  Alas, there was a problem – no tomatoes, neither cherry nor Campari – the only edible tomatoes available in Pittsburgh without going to the wholesale vegetable markets in the Strip District at this time of year.  However . . . there, in the back of the refrigerator, was a three-quarters-full jar of semi-sundried cherry tomatoes.  If you don’t know about these babies – find out.  They compare to your standard-issue sundried tomatoes as an Italian leather jacket compares to combat boots.  But, I wondered, would the concentrated tomato flavor be too rich for the already rich-with-tuna Niçoise?

As it turned out, not at all.  Beez and I thought this one of the better salads we’ve had in a while.  (We love Alex Guarnaschelli’s light take on the Niçoise – no potatoes.  And Beez loves the absence of anchovies, which I would typically slip onto my plate – but with the sundried tomatoes the anchovies would have been supererogatory – look it up.)

And it occurred to me as we were enjoying our new-fangled Niçoise, that this is how new dishes and recipes come about – people either run out of ingredients or they just get so hungry that they’ll eat whatever is available.  It is trite to speculate that this is why anybody ever ate an oyster.  But how, I’ve often wondered, did people learn to eat cassava (from which cyanide has to be leached, before this tough root can be broken down and boiled to make a sort of gloppy food), or to brew coffee (which requires roasting the beans and then grinding them and then steeping them in boiling water)?  And, for God’s sake, why did anyone ever, and why do they still, eat Puffer Fish?  And don’t get me started on fast food, or foams, or cupcakes. 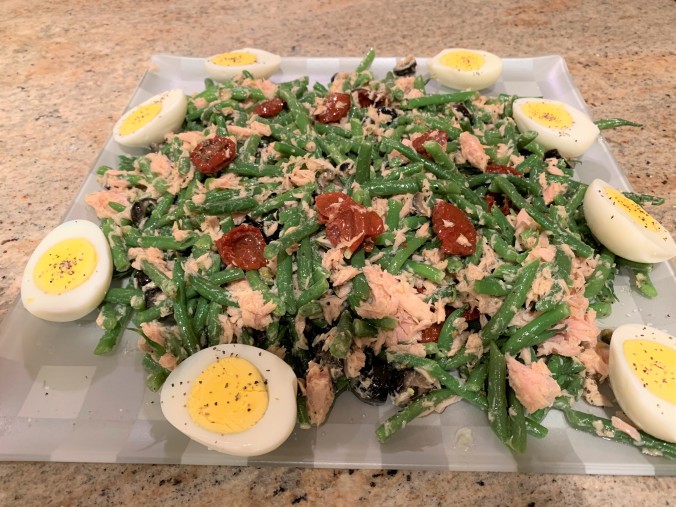 1/3 – 2/3 cup of extra-virgin olive oil (we like our dressings on the light, tart side, so we used less than Guarnaschelli’s recommendation of 2/3 cup)

½ cup black olives, pitted and roughly chopped (do yourself a favor and use a can of pitted olives – the sundried tomatoes lend all of the earthiness needed to this dish)

Pinch of sugar
Leaves from 4 sprigs of basil – as many leaves as you like.Kosher salt

Boil the eggs.  Put the eggs in a medium pan and cover with cold water.  Bring the water to a boil, then reduce heat to simmer gently for 11 minutes.  Drain water from pan and run cold water over the eggs to stop them from cooking.  When cool, peel and quarter, lengthwise.

Make the vinaigrette:  Whisk mustard, vinegar, capers, caper brine and ¼ teaspoon of salt together.  Slowly whisk in the olive oil.  Stir in the olives and taste for seasoning.

Cook the beans:  Bring about 2 quarts of water to a boil and season heavily with salt.  Prepare a bowl of ice water large enough to hold the beans.  Drop the beans into the boiling water and cook until tender – maybe 2 minutes for haricots vert and 3 or 4 for standard-issue green beans.  Transfer beans, using a slotted spoon, into the ice bath to stop the cooking.  When cool, drain beans and spread on kitchen or paper towels to dry.

Toss the tomatoes with some salt, the sugar and a good spoonful of the vinaigrette.  Put them on a serving platter.  In the same bowl, toss the green beans and the tuna with some more dressing.  Layer them over and around the tomatoes – put some tomatoes on top so that your diners know what they’re getting.  Arrange the eggs on the edges of the platter.  Now stir the basil leaves into the remaining dressing and drizzle over the salad.  (If you have no or little dressing left, just sprinkle the leaves over the salad.)

A nice piece of crisp, parmesan toast goes well with this dish.