Well, I suppose a simple roasting chicken, butchered and sitting in the cooler at Giant Eagle isn’t much of a beast, but Mimi Thorisson is certainly a beauty, as is her cooking, especially her Roast Chicken with Chestnuts and Cabbage.  Though, now that I think about it, our modern super-market chickens are rather beastly, and finding one under 4 lbs. (which is what Mimi’s recipe calls for) is almost impossible. 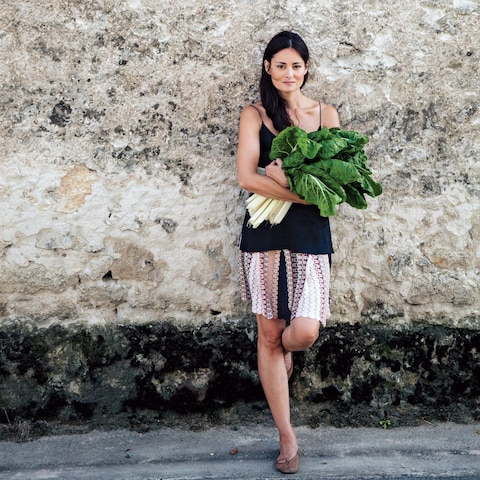 A little research discloses that today’s chickens are roughly 4 times as heavy as the chickens of 1948, when the industry began a contest to grow “the chickens of tomorrow.”  Specifically, they were looking for chickens that were meatier, larger, and faster growing.  So, you are most likely eating the “chicken of tomorrow” today, a breed known as Arbor Acre – a real bruiser of a bird.  There are several upsides to this – our modern chickens cost much less per pound, feed more per pound, and the poultry industry, as it became more efficient, plucked, butchered and cleaned the chickens for a few cents a bird.  Your grandmother, in the 1940s, had to do all of those things for herself.

Now Mimi Thorrison cooks chickens in France, where they still grow more traditional birds – more leg, less breast – and where, I am told, the chicken tastes more “chickeny” whatever that means.  (More like alligator or frog?)  But I have put some notes into the recipe to help you adapt to the ‘beasts’ you’re likely to be buying at your market.  I’m also throwing in Mimi’s recipe for mashed potatoes and fennel which, trust me, is better than 99.9% of the mashed potato recipes on the planet.

As for the rest of the week, I really wish you could have joined us for the Tostadas, which were very good, or the Pork Chops and Apples in Mustard Sauce or the Asparagus Soup, which were great.  But I’m thinking, with the cold setting in, you could use a nice Sunday dinner comfort-food recipe.  The chestnuts and cabbage make this one of the more memorable roast chickens we’ve ever cooked of any size.

Note:  I’m glad you didn’t join us for Mere’s dinner for Beez, which was the best food of the week.  If you had come, there might not have been enough left for seconds.

ROAST CHICKEN WITH CHESTNUTS AND CABBAGE

(Remember to take the chicken out of the refrigerator

at least 30 minutes before cooking, and the butter

1 whole chicken (3 ½ pounds) – if you get a larger bird, simply increase the cooking time at 350 F
4 Tablespoons Butter
Fine Sea Salt and Ground Black Pepper (we used Kosher salt)
4 garlic cloves unpeeled
1 bunch of thyme
1 small onion, halved
1 bay leaf
8 peeled cooked chestnuts (bottle or vacuum-packed) – Italian groceries carry bottles of these.  This dish is about the chestnuts and the cabbage, as much as the chicken.

Preheat oven to 350 F.  (Take the chicken out at least 30 minutes before cooking.)

After this first roasting, raise the oven temperature to 400 F and transfer the chicken to a large plate – tip the chicken vertically to let juices run into the pan.  You’ll be roasting it longer, after you get the cabbage going.

Keeping all the fat and juices in the roasting pan, add the cabbage, chestnuts and 4 tablespoons of butter.  Season with salt and pepper and toss well.  Put pan in oven and roast for 10 minutes.

Now pour in the stock and wine and stir to combine.

Brush the chicken with the remaining – melted – 1 tablespoon of butter and return to the pan.

Finish the dish and serve:

Return the pan to the oven and roast until the chicken is golden brown and cooked through – 10 – 20 minutes.  Use a thermometer inserted into the thickest part of the thigh to check temperature.

Let the chicken rest for 15 minutes before serving with the cabbage and chestnuts, and, if you’d had the good sense to cook it, Mashed Potatoes with Fennel (see below).

Pour an inch of water into a large pot and bring to a boil over medium-high.  Add a steamer insert to the pot – make sure the water does not touch the insert.  Add the potatoes and fennel to the steamer, cover and steam about 15 minutes – until tender.

NOTE:  Yes, you have to steam the potatoes and fennel.  You will not believe the creamy consistency this give the dish.

Transfer the vegetables to a warm serving bowl and mash with a potato masher (do not use an egg beater).  Mix in the cream, the butter, and the egg yolk and season with the salt and pepper to taste.  Garnish with the fennel fronds.

Bill cooking and Tim holding forth on Sunday