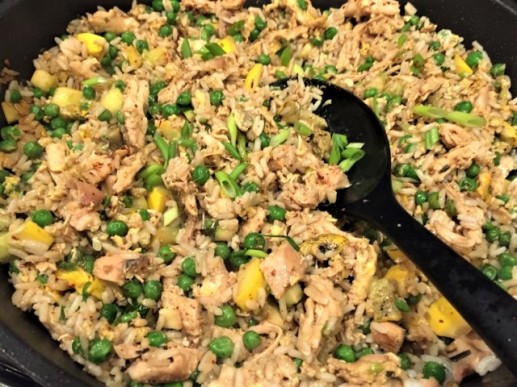 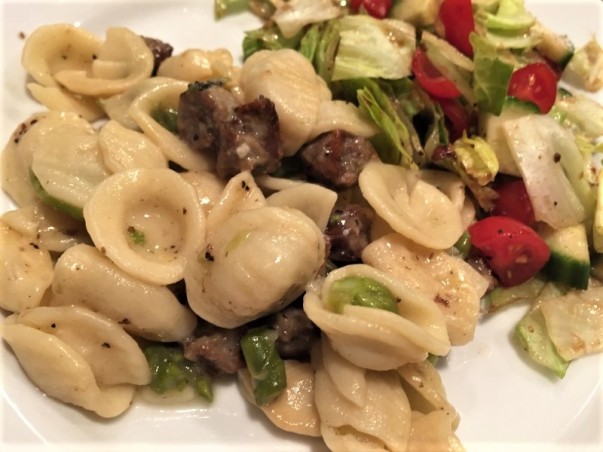 Tuesday:          Orecchiette with Sausage and Asparagus 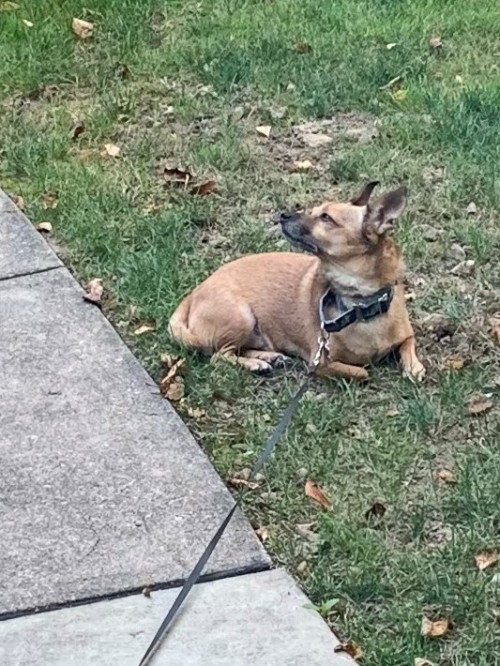 Russell keeping his eye on an ominous cloud formation. 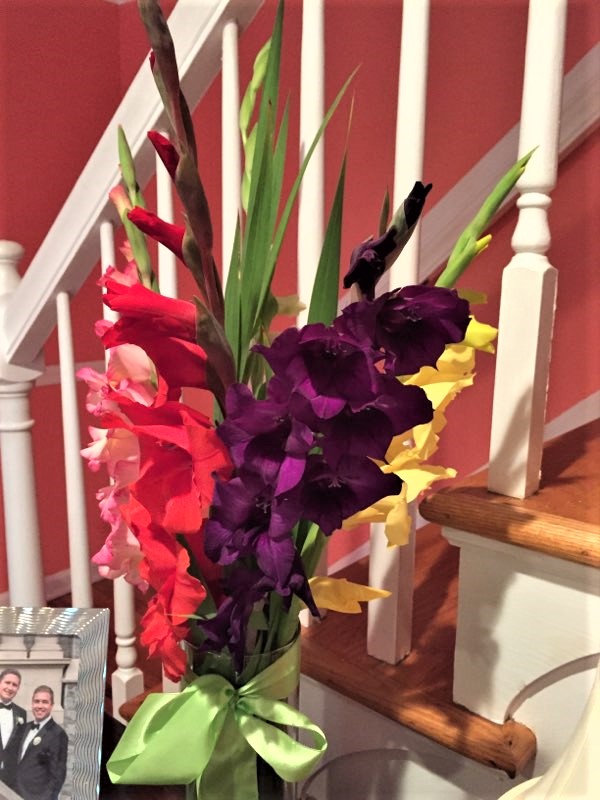 Thursday:        Dinner Party with Dorrie and Dick, Hilda and Tim and Julie 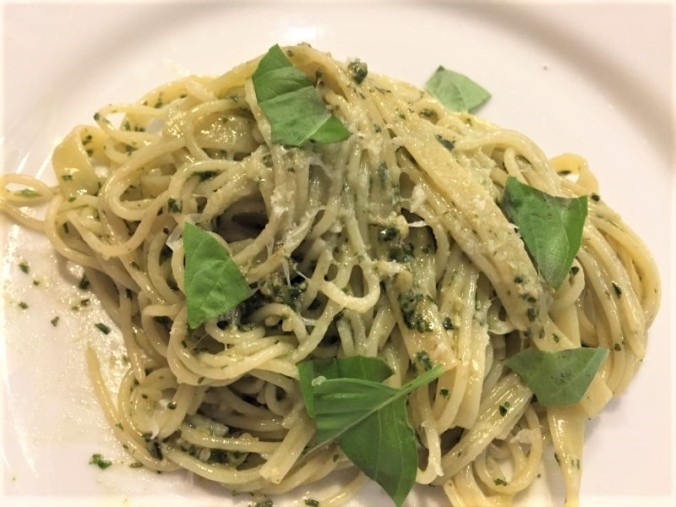 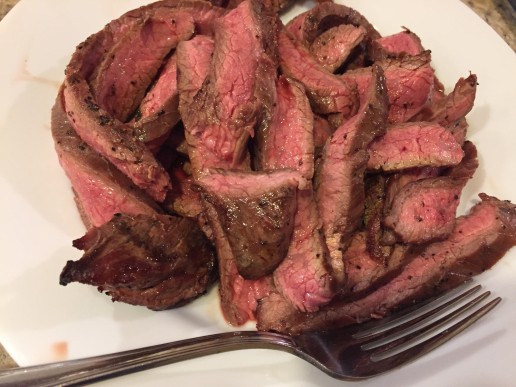 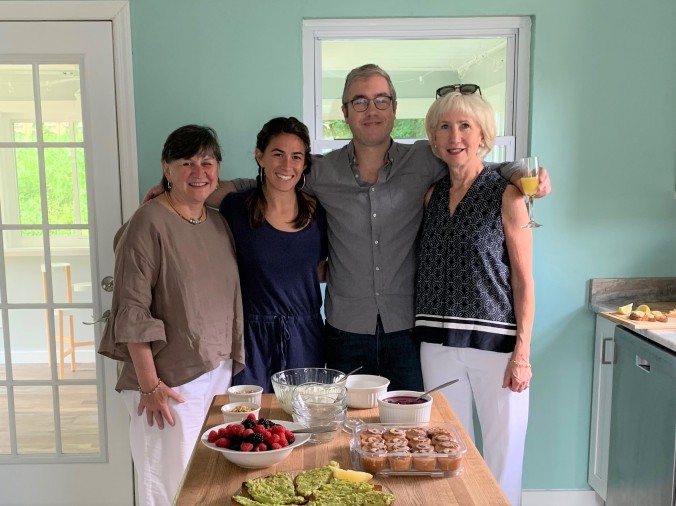 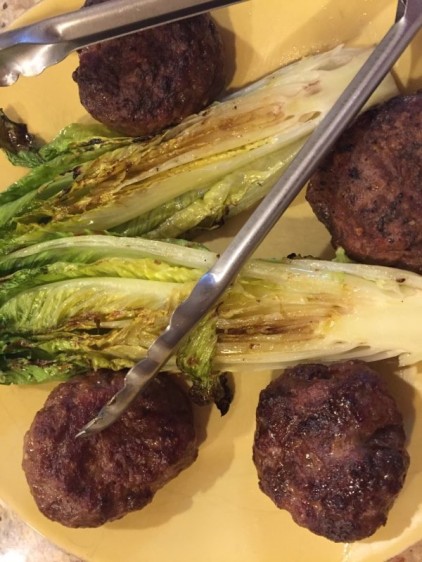 We were better fed than we deserved last week and not just by ourselves.  On Sunday we had brunch with Billy and Emily.  Emily, it seems clear, will become the best cook in the family.  (Not that she isn’t a better cook than Beez and I already – but she hasn’t formally joined the family yet, although we do think of her and treat her that way.  But is a betrothed person a member of the betrother’s family, legally speaking?  Please excuse me for this digression, but I wanted to give the hermits among you some sense of how complicated family life can be.)

Barbara and Michelle (Emily’s mom) and I were invited for brunch and to see Billy and Emily’s new home in Morningside on Sunday.  And we were anxious to look around the place and see what they’ve done with it in two short weeks.  Judging from the universal order and tidiness of everything, the new house seems rather more an Emily-type of place than a Billy-type.  But he does seem to be learning.

The kids have a fine home and what’s even better is seeing the obvious interest and pride they take in it and the plans they have for it.  And Emily’s brunch buffet was perfect.  We had excellent yogurt with granola and stewed berries.  We had savory avocado toasts and sweet and nutty peanut-butter toasts with bananas.  And we were tempted by – and gave in to – the dark, sweet seduction of cinnamon rolls.  We had a great time, in large part because of the food, but in larger part because we discovered that Michelle and Barbara and I get along easily (thank God), and in largest part because of the love and excitement of Billy and Emily.

Earlier in the week, we had a rollicking dinner with Tim and Hilda and Dick and Dorrie and Julie– a reprise of the excellent cocktails and dinner that Dick and Dorrie hosted in Naples last March.  Again, the best part of the dinner was the camaraderie, but we had some mighty fine food as well, with Hilda’s signature endive and goat-cheese appetizers and Julie’s beautiful flowers and Dorrie and Dick’s gifts (Dorrie – the toffee is gone, so if you’re going to be Ligonier soon . . . ).  It is also true that Barbara made a fine salad, that I grilled chicken and made two mighty chimichurri sauces and a few other things in a monumental fit of energy surprising for someone my age – but let’s set that aside for a second.  Here is what I want to bring to the front – Stewed Berries.

Stewed berries, like stewed tomatoes, sound boring – something you might help yourself to if you were ever trapped in a southern town where the only available restaurant was a country-style buffet.  But get that picture out of your mind.  These stewed berries, which we had for dessert along with ice cream on Thursday, and which we spooned over Emily’s yogurt and granola on Sunday, are as far removed from boring as Sophia Loren is from Ma Kettle.

And this may be the simplest recipe (though that rotisserie chicken comes close) that we have ever shared with you.  We are indebted to Martha Stewart for this – although we couldn’t quite figure out what a ‘half-pint’ of berries was, so we’ve put our own spin on the quantity of fruit involved.  Julie was correct when she said this was good enough to drink – I’ve done it, and it is.  But you can also pour it over ice cream, or over a sweet crostata or cobbler, over yogurt, or just drizzle it onto a piece of toast in the morning (a sort of very loose preserves).

I apologize to the followers of this blog who are striving for machismo and can’t be seen outside the home with stewed berries.  We’ll get back to savory next week, men.

Ingredients:  Makes about 2 ½ Cups – if you poured this over ice cream you could serve 20 (you’ll have plenty left over)

5 small packets of raspberries (M. Stewart calls for 3 half-pints, but the packages at all of our markets are “6 oz.”, so we guessed that 5 was about right

2 tablespoons Framboise (optional – we didn’t have any, so we didn’t use any)

Set aside about ¾ of one of the packets of raspberries – you’ll be adding these whole to the completed sauce.

Combine the remaining berries, sugar and water in a medium saucepan and stir a bit, gently.

Bring to a boil, then cook over medium to medium-low (if using high-btu burner), stirring from time to time for about 12 minutes.  The sugar will have turned into a syrup and the berries will release their juices.  Remove from the heat, stir in Framboise and then the remaining raspberries.

Enjoy – If you have vanilla ice cream, spoon some of the warm sauce into a bowl and top with a scoop of ice cream and another drizzle of sauce on top.