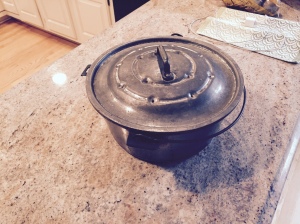 In praise of cooking vessels – The Pot

Beez, the ever-observant, noted that all the food we cooked this last week was cooked in one pot – from the Bolognese through the fish stew to the soup and the Pot-au-Feu. We have two great pots, including one of great age and proud lineage (it was from the kitchen of Jeanne Duffy – Beez’s mom).  You can see a picture of it above.

Well, we’ll come back to those casseroles and what can be said for them at a later date. But one of the beauties of one-pot meals is that they allow you to keep adding and merging flavors – a bad thing if the flavors are, say, chocolate and fish, but a wonderful thing if the flavors are onion, garlic, beef, celery root, carrots, cabbage, bay leaves, salt, pepper, and chicken stock.  And if you sear the beef, or slightly burn or caramelize the onions, you get the addition of the roasted flavor of the burnt bits on the bottom of the pan or the soft sweetness of the onions.  All in all, a wonderful way to cook and not bad when it comes to cleaning up, although, as Beez also noted (adopting the commanding tones of SWMBO), cleaning a large Dutch oven 7 days in a row is not her idea of a trip to the beach.

The pot we used produced three dinners worth talking about, but we’ll focus on two – the fish and sausage stew and a hearty French peasant dish – Pot-au-Feu (beef stew).  The first dish is from a new favorite cook – Tom Kerridge – and the Pot-au-Feu is from a French Vietnamese cook about whom I know nothing.  (You can feel free to try an unknown chef’s recipe t the investment of time in any one recipe is minimal and if the result is not to your liking you can simply throw it out.  That is one of the beauties of the craft of cooking.  If, on the other hand, you have painted the Sistine Chapel and, later, discover that it is not to your taste, you have a problem.)

Here is the simple, but time-consuming recipe for Luke Nguyen’s Pot-au-Feu. This is highly adapted, since beef cheek, which he calls for is not available at most Pittsburgh markets and – more importantly – his recipe amounts would require a giant stock pot – a pot so large that James Harrison could sit in it, comfortably (you’ll want to get this image out of your head before eating the dish).  So here is something like half his recipe with a few things left out and others re-proportioned.

Buy, beg or steal about 2 lbs. of beef shoulder (at Whole Foods it is one of the three pot roasts – rib, shoulder, rump – they offer) – slice this into 4 portions. You will also need beef marrow bones – they sell these in a packet of three at most markets – and a package of short ribs (or 1 beef cheek if you can find it).  And prepare 2 onions, halved (peel the skin off and cut the nasty bits of root away, but not the entire root end which you need to hold the onion together while it cooks), 4 leeks (white parts only), 4 small turnips or 1 large turnip,1 celery root, ½ head of cabbage cut into about 6 pieces, 8 small red potatoes or 4 medium potatoes, halved, 6 carrots, 8 peppercorns, 8 cloves, 1 tsp of sea salt and a bouquet garni consisting of 2 bay leaves, 4 stalks of parsley and a sprig of thyme.  For serving you will want sea salt, cornichons and Dijon mustard.

In a Dutch oven (your largest pot) put all of the beef, including the bones, cover with cold water and bring to a boil. Skim the impurities from the top, remove from the heat and set the meat aside.  Discard the water, clean the pot and put the meat back in.  Push the cloves into the onions and add those to the pot along with the leeks, celery root, salt, pepper and bouquet garni.  Cover with as much water as allows you to bring it to a boil without overflowing (this is just under the rivets that hold the handles to the pot for most pots) and bring back to a boil.  Skim the impurities again and reduce to a simmer and cook uncovered for 2 hours and 30 minutes, skimming occasionally.  (You may need to add water)

Now add the turnips, carrots, potatoes and cabbage and cook another 30 minutes (until soft)

Serve this with sea salt, mustard and cornichons on the side – a little mustard will cut the unctuousness of the meat just enough and make the cabbage taste like a mild kraut.

Clearly, this dish is that answer to Clara Peller’s classic question, “Where’s the Beef?,” but it’s also a wonderful Sunday dinner. It will remind those of you who are Irish of ham or corned beef and cabbage – but it will taste better.  (Observation of SWMBO who, like me, dreaded the ham and cabbage dinners of our youth.)

Tom Kerridge’s simple dish – Pollock, Chorizo and Chickpea Stew – can be found on-line.  This recipe, from his Tom Kerridge’s Proper Pub Food, is light enough to appeal to non-meat eaters but hearty enough to serve at a tail-gate.  Not a whole lot of fish you can do that with.  The dish is meant to be savory as well as hearty – so you need to check the seasoning as you go along.  I skipped the soaking of the beans – Bush’s pre-cooked canned cannellini beans will work for me until the end of time.  (I even like the taste of the liquid the beans are packed in.)  One of the keys to this dish is to get a meaty fish.  Pollock is hard to find.  Cod is the best substitute, but the cod at the G.E. is never properly thawed out.  If you buy it a day ahead, dry it, wrap it in a paper towel and plastic and dry it a few more times, it will work – but, alas, I didn’t have the time, and had to splurge on flounder.  Haddock would be great as well, but G.E. didn’t have it.  Nor did they have chorizo!  So we made this dish with Uncle Charly’s hot Italian sausage.  The chorizo would add a nice flavor – we tried to mimic it a bit with an extra teaspoon of smoked, hot paprika.  Serve this with home-made bread, or toasted baguette, or a naked pizza and a good pint of ale and sit back and enjoy the soccer match on the telly.  As Tom would say – “This is a right meal for your good mates.”

Note: A thrown-together dinner for Billy and Barbara on Saturday – using the pot, once again, to reheat a doctored version of the minestrone cooked on Tuesday as a first course, followed by a frittata and seared ham steak with a sauce of mustard and maple syrup (don’t knock it until you try it), was memorable.  I’ll be praising frittatas and telling you about our favorites in the near future.  Let me know if you need the ham steak recipe. And . . . if you want to add a decadent appetizer to your Pot-au-Feu, reserve the marrow bones after the first boil and, put them on a sheet tray into a 450° oven for 15-20 minutes.  Put the bones on a dish and serve them with toasted bread and sea salt – you’ll need a small spoon or knife to dig the marrow out of the bones and spread it on the bread.  Billy and I think this is great – SWMBO has ordered us both to get a EKG.