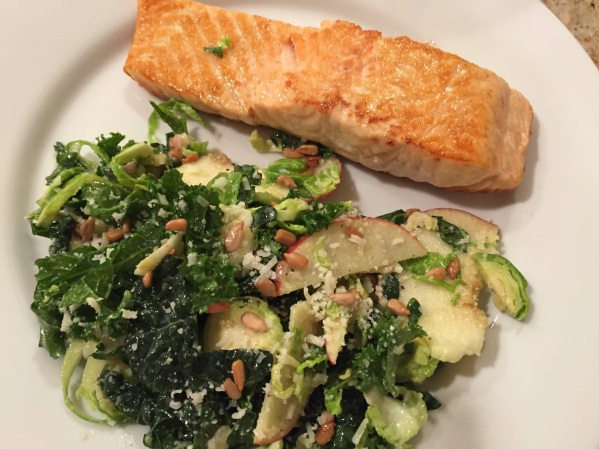 Saturday:                  Alta Via restaurant for the Pasta Special, one martini and two glasses of sauvignon blanc

I hope that your Thanksgiving was warm and filled with family and friends.  Here at Casa Stuarti, Beez and I rose early to knock out as much of the dinner as we could before taking off to Rosie’s wonderful annual Bloody Mary fest.  Many friends and some family showed up, but Rosie’s party is so popular that you meet ‘friends’ that you only know from that party – people you reliably meet once a year and whose names you could not remember under threat of being guillotined.  But whose faces and good cheer are as familiar as Thanksgiving Turkey.  Thanks, Rosie!

From Rosie’s we moved on to Duffy and Dana’s where the main attractions were Dana’s wonderful food and the presence of thousands of children.  The boys are generally out on the lawn playing football.  Frankly, I don’t where the girls go – to Elise’s room, I guess.  And, oh yes, there was food everywhere – pigs in a blanket at both Rosie’s and Duffy and Dana’s, dips, ham (real ham, not that deli stuff) sandwiches at Duffy and Dana’s and an array of stuff I’ll never remember, but which I could not not eat.  (No, Joey, that’s not a double-negative, but a grammatical formulation known as a litotes, in fact, a sort of super-litotes)

Our own Thanksgiving was, even though we ought not to say so, the best we’ve cooked and choreographed to date.  Our secret being the reduction of side dishes to a number you can count on one hand, versus our former practice of side dishes that you needed both hands and the toes of one foot to calculate.

I’m not going to share our Thanksgiving recipes with you since yours are, well yours – shrouded in tradition and family lore, written on gravy stained index cards or sheets of paper torn from note pads.  Stick with them – your kids will be upset if you don’t.

I was tempted to share a favorite leftover recipe – Shepherds Pie with Turkey – but by now your leftovers will be gone and, if you’re like us, you won’t have extra turkey until this time next year.

What about those sautés in the title of this post?  Well, the recipes below are really sauces, though they both begin with sautéeing vegetables.  But “sauces” didn’t work as a pun – so sautés they had to be.

You cook pasta, right?  Well then you need one of these in your repertoire.  You will not believe how deep a flavor you can create in a less than an hour, with a few vegetables and herbs and canned tomatoes, until you try these.  If you want to impress someone, on short notice, with your cooking, casually suggest this for dinner at the last minute.  You could build a restaurant around these babies.

Among other things, we are thankful for the recipes and cooking techniques of Samin Nosrat and Alex Guarnaschelli, the two geniuses behind the recipes below:

45 minutes, or about 32 minutes if you can cook the pasta while finishing the sauce, which Chef Guarnaschelli can do, but I can’t.

28 oz. Can of whole peeled tomatoes (if you wish to spring for Cento’s San Marzano tomatoes, this will be even better – but the dish will work with any of peeled whole tomatoes)

1 pound of dried pasta.  (We like bucatini, which is what Alex suggests, but spaghetti or fettucine would also work, or even some of the corrugated short pastas)

1 small-medium yellow onion, thinly sliced (we like to have the onion and slice it into half-moons)
1 medium carrot, grated
5 medium garlic cloves, grated (we use 2)
½ cup fresh basil leaves
2 cups grated Parmigiano-Reggiano (Pecorino or Romano will work as well – with the Romano bringing a less-sophisticated, earthier flavor to the dish)
2 tablespoon of extra-virgin olive oil
1 teaspoon of red pepper flakes
1 teaspoon of sugar (do not omit, otherwise the tartness of the tomatoes will drown out some of the other flavors)

Cut the onions, grate the garlic and carrot, pick the basil leaves and measure out the red pepper, and the grated cheese.

Set a large pot of generously salted water on low – medium so that you can bring it to the boil, quickly, once the sauce is near finishing.

Heat the olive oil over medium, and, when shimmering, add the onion, carrot and, on top of the others, the garlic.  Season with a good pinch of salt and the red pepper flakes.  Cook until the onion becomes translucent – about 6 minutes or a bit longer.

Now add the sugar and the tomatoes with their juices.  If you haven’t already crushed the tomatoes into pieces by hand (see “Prep” above), break them up with a wooden spoon.  Cook the entire mixture, stirring occasionally, for about 9 minutes.  The tomatoes should be tender.

Add 1 cup of water and cook until the tomatoes are falling apart – another 9 minutes or so.  Taste for seasoning and stir in the basil leaves.

Note:  at this point we take the sauce off the heat and then reheat it before tossing it with the pasta.  If you’ve been cooking the pasta right along, no need.

Bring the pot of salted water to a rolling boil and add the pasta.  Reheat the sauce, as the pasta cooks.  When it begins to boil again, cook for 11 minutes, or whatever your package directions give as a time for ‘al dente.’  Grab a piece of pasta and taste it to make sure that it’s cooked, but still has some chew.  (You’ll need some tongs for this – fishing out a piece of bucatini or spaghetti or fettucine with a fork is a skill that very few humans in history have ever attained.)

50 minutes – 1 hour for those, me, for example, who can’t cook pasta and sauce concurrently.

2 medium onions, sliced thinly (we halve ours and slice them into half-moons)
4 garlic cloves (we used 2), sliced thinly
2 28 oz. cans of whole, peeled tomatoes and their juices
16 basil leaves (you can use 1 tablespoon of dried oregano as a substitute – we added just a little oregano to deepen the flavor)
Parmigiano, pecorino or ricotta salata for serving – we like the earthier, less salty tastes of the parm or pecorino
Extra-virgin olive oil

Set a large pot of salted water over low heat, so that you can bring it up to boil quickly, to cook the pasta, when the sauce is nearing completion.

Slice onions and the garlic.

Pour the tomatoes into a large bowl and break them up by hand and add maybe ¼ cup of water you have swirled in the cans to pick up any remaining tomato juices.

Set another large, heavy-bottomed pot (a dutch-oven or enameled cast-iron) over medium to medium-high.  You are going to be cooking onions and garlic and don’t want them to burn – you know how hot your hottest burner gets.  You need serious heat here, but you don’t want to burn the onions – a little browning is ok.

Basically, if you have a high btu burner, go more toward medium than high.

Once the pot is hot, add enough olive oil to coat the bottom – probably 2 tablespoons, and when it begins to shimmer, add the onions.

Reduce the heat to medium, season the onions with salt and cook, stirring occasionally until tanslucent – maybe 15 minutes.  Browning is ok – but at that point the onions are finished – you don’t want to scorch them.

When the onions are softened, pushed them to the side, add a spoonful of oil and then the garlic to the oil and cook for 20 seconds, then add the tomatoes.

Bring the mixture to a boil, then reduce it to a simmer.  Season with salt and torn basil leaves or the oregano.

Cook this over low heat, stirring occasionally with a spoon and not allowing it to scorch – you can add a little water if absolutely necessary.

The sauce will be finished in about 25 minutes.  Taste it as you go and you’ll see that it loses the tinny canned taste at that point.  If it hasn’t, cook it longer.

When the sauce is finished, bring it to a rapid simmer and stir in ¾ cup of olive oil, then allow it to simmer for 3 minutes.  The oil will create a rich sauce as it emulsifies.  Remove from the heat.  Taste and season, if needed.

Bring the pot with the salted water to a boil and add the pasta and cook until just shy of al dente.  (You’ll be finishing the pasta in the sauce.)

As the pasta nears completion, put the sauce back on the burner and bring it to a low simmer.  With tongs, transfer the pasta into the sauce and finish cooking for a few minutes – adding a bit of pasta water to achieve the consistency you like.

[BIG NOTE:  Samin purées her sauce in a blender.  We prefer the more rustic, unblended sauce described above – but if you are a more delicate soul, by all means purée.]

Serve with grated or shaved cheese.

2 thoughts on “A TALE OF TWO SAUTÉS”